I can't say "s*c*ss**n" anymore (it's a bad, bad word) without the government finding me and thinking that I'm a right wing extremist. But here Ron Paul does.

Posted by Shiloh Logan at 12:01 AM No comments:

A shift from the political to the religious (if such a shift can actually be made).

"One of the great consolations of this Easter season, is that because Jesus walked such a long lonely path utterly alone, we do not have to do so... May we declare ourselves more fully disciples of Jesus Christ. Not in word only, and not only in the flesh of comfortable times, but in deed and in courage and faith. May we stand by Jesus Christ at all times, and in all things, and in all places that we may be in, even until death. For, surely, that is how He stood by us when it was unto death, and when he had to stand entirely and utterly alone."

Posted by Shiloh Logan at 1:37 PM No comments: 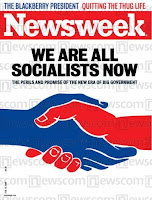 This is what has happened. A Rasmussen Report released that only half of Americans anymore are sure that Capitalism is the better economic system.

Why this change in trends? The entitlement generation has certainly come full swing. When more Americans receive government money that DO NOT, what are we to do as a nation?

There is no such thing as a free lunch, and while most people who receive government money may actually have jobs -- they still do not pay enough in taxes as to compensate for what the government is paying. 10% of the American population receives food-stamps (31.8 million Americans), and over 5 million Americans regularly collect unemployment checks. The government is even offering money for people to get out of their own personal debt! Really?! Someone makes a bad decision and now I have to be responsible for it; otherwise, if I refuse to bail him out then I'm uncaring? Seriously? I'm a struggling college student who supports his family without receiving government grants -- what about me? Is it caring that I'm robbed from to bail someone else out? What happened to the strong work ethic of the American people?

I was on campus yesterday and overheard two girls talking. I was excited to hear one girl say, "Why do we in America place such holy regard to the 40 hour work week?!" I couldn't believe my ears! Finally, someone who agreed that the concept of only working 8 hours a day/40 hours a week is a ridiculous set-back for American ingenuity! My hopes were obliterated, however, as I heard this girl follow up: "I mean, I just don't understand why we can't just work 30 hours a week".

My mother's family was called to settle and establish the area of Salina and Redmond, Utah, and I have in my possession the first Plat Map of the area that was predominantly owned by my great-great-grandfather. I grew up hearing stories of my grandfather, as a child, working 12 - 15 hours a day on the farm. He tended the chickens, pulled the weeds, drew the water, took care of the animals, and helped constantly around the house (the day was never over until all the work was one); when he was just past 8 years old, he headed out to help in the fields from before sun-up until several hours after sun-down. Such a life was not unusual; everyone that was called to settle the valley worked such hours -- usually more. They did not get paid by the hour; they did not have benefits; they did not realize a 40 hour work week or expect to be paid overtime; they did not have security or a 401k; at the time, they did not have the government to fall back on and subsidize them if their crops failed; they had industry, manpower, and a will to fight on and survive. They had a spirit that is sadly no longer present in modern-day America.

Today, Americans are pampered. What was once a prosperous nation -- built by the mercy of God through sweat, labor, and American grit - is now a lazy, complacent, and an idolatrous country. We call evil good, and good evil. We seek ways get out of work instead of engaging ourselves and providing for our families "by the sweat of our [own] brow". We claim entitlements as rights, but deny the industry and hard work that made us great. We mandate pension-plans, minimum wage, disability, social-security, and benefits; we regulate worker's compensation and unemployment; we give up the mentality of "work until the job's done", for an 8 hour day and 40 hour work week (plus overtime if we're dared to work anything over that). We now believe that it is only justifiable to work 40 hours a week, and it is unjust to work over 40 hours unless compensated at least time and a half. If our country would have had to endure the penalties, regulations, and laws that we now find common, ill-perceived inalienable, and intrinsically existent when our nation was formed -- we would have been strangled and left for dead within our own cradle.

I am living amidst plenty today because my grandfather, and my great-grandfather, and my great-great-grandfather sacrificed, worked, toiled, bled, labored, and pushed themselves beyond their own limits to merely exist. They had no security but what they found working 12 - 20 hours a day, 6 - 7 days a week, 365 days a year. We live in a prosperous America today, because we sacrificed yesterday. The standard work in America through the 1800's and early 1900's was often reduced to sweatshop like conditions with rough-treating foremans; immigrants were paid pennies compared to their neighbors, as they toiled in horrid situations. Even through this type of labor condition, the United States still operated as the "land of the free, and the home of the brave" and became the greatest economic and political power this world has ever known. Sadly, we often forget this one lesson: unless we continue sacrificing, our children will end up in poverty (we can see for ourselves the consequence of this thought as our government spends, Spends, SPENDS today, and passes debt slavery and poverty onto our children)! The moment we become complacent to our own situation and demand our luxuries (for ourselves, and others), we ourselves become slaves. John Adams may not have thought this statement through when he said:

"I must study politics and war that my sons may have liberty to study mathematics and philosophy. My sons ought to study mathematics and philosophy, geography, natural history, naval architecture, navigation, commerce, and agriculture, in order to give their children a right to study painting, poetry, music, architecture, statuary, tapestry, and porcelain."

John Adams learned through experience the philosophies and principles he adhered to, but did he forget what will happen to his great-grandchildren -- the generation that must surely exist after his grandchildren "study painting, poetry, music, architecture, statuary, tapestry, and porcelain"? What kind of people are they to become? All knowledge is fundamentally acquired through experience; what happens when those grandchildren and great-grandchildren no longer have the work ethic and spirit of freedom of their forefathers? Without the experience of toil, labor, and sacrifice we are by nature of temptation a wicked, lazy, and idolatrous people -- a condition most repugnant to the Lord. Hence, the reason we are to anxiously engaged in a good cause.

Such an America obviously does not exist anymore. Sadly, we no longer want to work by the sweat of our own brow (we want to live of the sweat of another). We want our social-programs, welfare, free-public-schools, paid-hospitals, 40-hour work weeks, food stamps, government grants, and some facade of security!

“I do not choose to be a common man. It is my right to be uncommon. I seek opportunity to develop whatever talents God gave me-not security. I do not wish to be kept citizen, humbled and dulled by having the state look after me. I want to take the calculated risk; to dream and to build, to fail and succeed. I refuse to barter incentive for a dole. I prefer the challenges of life to the guaranteed existence; the thrill of fulfillment to the stale calm of utopia. I will not trade freedom for beneficence nor my dignity for a handout. I will never cower before any earthly master nor bend to any threat. It is my heritage to stand erect, proud and unafraid; to think and act myself, enjoy the benefit of my creations and to face the world boldly and say- 'This, with God's help, I have done.' All this is what it means to be an American.”
--Ezra Taft Benson--

"If you love wealth more than liberty, the tranquility of servitude better than the animating contest of freedom, depart from us in peace. We ask not your counsel nor your arms. Crouch down and lick the hands that feed you. May your chains rest lightly upon you and may posterity forget that you were our countrymen."
-- Sam Adams --

What was Obama actually saying?

Posted by Shiloh Logan at 3:42 PM No comments:

Posted by Shiloh Logan at 12:56 PM No comments:

You had me until the whole "New World Order is emerging" thing...

Posted by Shiloh Logan at 3:06 AM No comments:

I haven't laughed quite so hard in a very long time. It's about time we started seeing past the sham and flattery of prominent men and fake Libertarians...

"Recently, my Glenn Beck fantasy came true... but not the one where we are marooned on a desert island and we run out of food, so he eats me and I become a part of him..."
Posted by Shiloh Logan at 5:15 PM No comments: