Most Notable Quote of the Year...

Co-anchor Chris Matthews: “I have to tell you, you know, it’s part of reporting this case, this election, the feeling most people get when they hear Barack Obama’s speech. My — I felt this thrill going up my leg. I mean, I don’t have that too often.
”Co-anchor Keith Olbermann: “Steady.”
Matthews: “No, seriously. It’s a dramatic event. He speaks about America in a way that has nothing to do with politics. It has to do with the feeling we have about our country. And that is an objective assessment.”

Wow, that's objective?
Posted by Shiloh Logan at 11:19 AM No comments:

Congressional Motors Announces
The First Car for 2012
The Pelosi 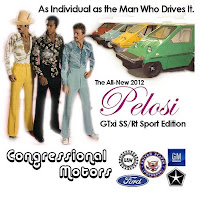 It's in the way you dress. The way you boogie down. The way you sign your unemployment check. You're a man who likes to do things your own way. And on those special odd-numbered Saturdays when driving is permitted, you want it in your car. It's that special feeling of a zero-emissions wind at your back and a road ahead meandering with possibilities. The kind of feeling you get behind the wheel of the Pelosi GTxi SS/Rt Sport Edition from Congressional Motors.

All new for 2012, the Pelosi GTxi SS/Rt Sport Edition is the mandatory American car so advanced it took $100 billion and an entire Congress to design it. We started with same reliable 7-way hybrid ethanol-biod iesel-electric-clean coal-wind-solar-pedal power plant behind the base model Pelosi, but packed it with extra oomph and the sassy styling pizzazz that tells the world that 1974 Detroit is back again -- with a vengeance.

We've subsidized the features you want and taxed away the rest. With its advanced Al Gore-designed V-3 under the hood pumping out 22.5 thumping, carbon-neutral ponies of Detroit muscle, you'll never be late for the Disco or the Day Labor Shelter. Engage the pedal drive or strap on the optional jumbo mizzenmast, and the GTxi SS/Rt Sport Edition easily exceeds 2016 CAFE mileage standards. At an estimated 268 MPG, that's a savings of nearly $1800 per week in fuel cost over the 2011 Pelosi.

Even with increased performance we didn't skimp on safety. With 11-point passenger racing harnesses, 15-way airbags, and mandatory hockey helmet, you'll have the security knowing that you could survive a 45 MPH collision even if the GTxi SS/Rt were capable of that kin d of illegal speed.

But the changes don't stop there. Sporty mag-style hubcaps and an all-new aggressive wedge shape designed by CM's Chief Stylist Ted Kennedy slices through the wind like an omnibus spending bill. It even features an airtight undercarriage to keep you and a passenger afloat up to 15 minutes -- even in the choppy waters of a Cape Cod inlet. Available in a rainbow of color choices to match any wardrobe, from Harvest Avocado to French Mustard.

With an MSRP starting at only $629,999.99, it's affordable too. Don't forget to ask about dealer incentives, rebates, tax credits, and wealth redistribution plans for customers from dozens of qualifying special interest groups. Plus easy-pay financing programs from Fannie Mae.

So take the bus to your local CM dealer today and find out why the Pelosi GTxi SS/Rt Sport Edition is the only car endorsed by President Barack Obama. One test drive will convince you that you'd choose it over the import brands. Even if they were still legal.
Posted by Shiloh Logan at 10:29 AM 1 comment:

So, once again, nothing happened. Isn't government corruption grand? We no longer have ethics in government. Absolutely amazing.

Sadly, I think that government corruption goes much deeper than this -- this is merely one example of a man who was not smart enough to not be caught.

I've met some pretty interesting and powerful people since coming to BYU, and the most poignant thing that has stood out is that these powerful men are just in fact men -- and that most of these men are relatively good intentioned. In meeting the co-founder of the neo-Liberalism theory, Dean of Governmental Studies at Harvard, and the Vice Chairman of the Trilateral Commission Joseph Nye Jr., I expected to see a man of cunning, avarice, greed, and a show of drunken dictatorialism. This was anything but what I saw. I saw a good nature fellow who was quite courteous, soft-spoken, and a mere medium through which a lifetime of ideas had been acquired and implemented through various social systems. There stood before me a man who not only perpetuated - but developed - the very theories that I stand against... And I saw that he was just a good-natured man that I disagreed with. Bad government may be influenced by Satan himself, but I have found that the men who do his greatest bidding do so under the best of intentions.

Ideas are where the battle is fought. The pre-mortal council was a battle of ideas. We have been told that the pre-mortal "war" is raging more furiously today than it ever has before, so we just assume that the war over "ideas" is just as strong and important as it has ever been as well.

This story, while I laugh at the situation, is a mere facade to what's truly going on under the surface and is very sad. The media will report this as proof that they catch REAL corruption. Men like the Illinois Gov. are ignorant -- no matter what side of the political fence you sit. The corruption indexes that the international community follow are a facade as well; they really only measure the stupidity of the leaders and the people.

This being said, how interesting would it be to create a REAL "Freedom Index" that members of the Church could use to find the spiritual, political, economic, and total corruption under which their governments operate?
Posted by Shiloh Logan at 1:08 PM No comments: